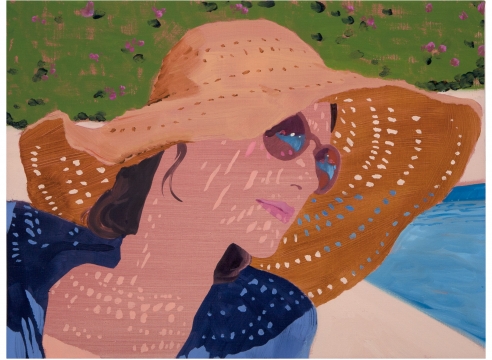 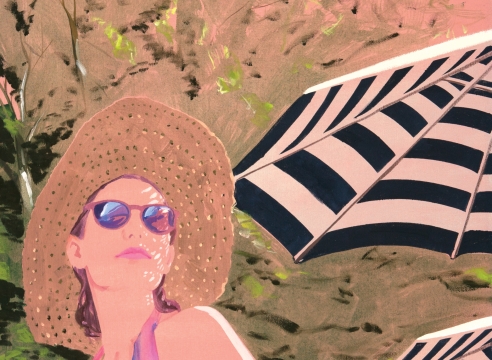 Sebastian Blanck was born in New Haven, Connecticut. He received his BFA in painting from Rhode Island School of Design. Documenting the small intimate moments in life, Blanck’s work is comprised of portraits of loved ones, fellow artists & musicians, and his children at play.  He uses a collage technique that layers painted paper over watercolor onto stretched paper. Blanck’s color and draftsmanship vibrantly capture personalities and moods to convey great familiarity with his subjects. Blanck currently lives and works in New York City.

The deeper you concentrate on something the more you can see. It’slike looking through a keyhole. At first it seems nothing is there, but once you get close, once you put your eye to the keyhole, a wholeworld opens up. Whether it’s intentional or not, that is where my work has gone. That is my voice.

Sebastian Blanck (b. 1976) creates intimate portraits and scenes of his family and friends through drawings, collages, and paintings. He presents quiet, everyday moments - snapshots that string together the story of his life. Each image offers a glimpse, but narrative is created only through the accumulation of images. Recording many of the same people for over 20 years, the artist has effectively created a visual diary of his life and those he loves.

Emerging in the late 1990s from the Rhode Island School of Design, Blanck entered an art world where figurative painting was often tinged with satire, or based on celebrity culture. Understanding that this was not his artistic language, he looked to artists including Pierre Bonnard and Edouard Vuillard as early influences. These artists shared his interest in the formal fracturing and layering of light, and the unironic depiction of their domestic worlds. Blanck’s aesthetic, however, has always been clearly contemporary. He worked in Alex Katz’s studio, whose influence can perhaps be seen in Blanck’s flat, stripped down images, and use of broad color planes. However, the large, billboard- like scale of Katz’s work feels guarded, whereas Blanck unabashedly invites the viewer to share his intimate gaze.

This exhibition, Canopy of Blue, manifests the artist’s continued exploration of color, light, veiling and patterning. Paintings include his wife, Isca, bathed in fractured sunlight through her hat, and his sons floating on paddleboards, the drifting clouds reflected on the calm lake. In a new series depicting his boys at an aquarium, the artist watches, as they observe the marine life. Here, Blanck has included several small aquarium watercolor collages. These works, for which he is best known, vary from his usual working method, because the figure is actually incised from paper, making the collage process reductive rather than additive. Visually, the cut-out figure becomes a negative, as if backlit.

Over the past few years, Blanck has returned to larger scale oil painting. Preparing the linen canvas with a colored ground, the artist establishes a unifying palette and tone. He begins by sketching the figure, and then builds up the painting, loosely basing the compositions on photographs. Painting allows him more freedom to improvise and play with the looseness of abstract elements, as his smaller works are more highly planned.

Water is often the backdrop for scenes of Blanck’s domestic life. He lives and works in Manhattan, but spends weekends and summers on a lake in upstate New York. The viewer observes the artist’sfamily, and the landscape itself, aging through the seasons and years. Witnessing these peaceful, domestic scenes, it is hard not to feel the artist’s melancholy – the beauty of the moment, and these blissful vistas, confronted with the persistent tug of reality and time’s inevitable progression.